An Introduction to Big Data: Clustering

There are many different clustering models:

In this article, I will walk through 3 models: k-means (centroid), hierarchical (graph), and DBSCAN (density).

The simplest clustering algorithm is k-means, which is a centroid-based model. Shown in the images below is a demonstration of the algorithm.

We start out with k initial “means” (in this case, k = 3), which are randomly generated within the data domain (shown in color). k clusters are then created by associating every observation with the nearest mean. The partitions here represent the Voronoi diagram generated by the means. The centroid of each of the k clusters becomes the new mean. Steps 2 and 3 are repeated until convergence has been reached.

The pseudocode of k-means clustering is shown here:

Let’s walk through an example. Suppose we have some data points as seen in the graph below: 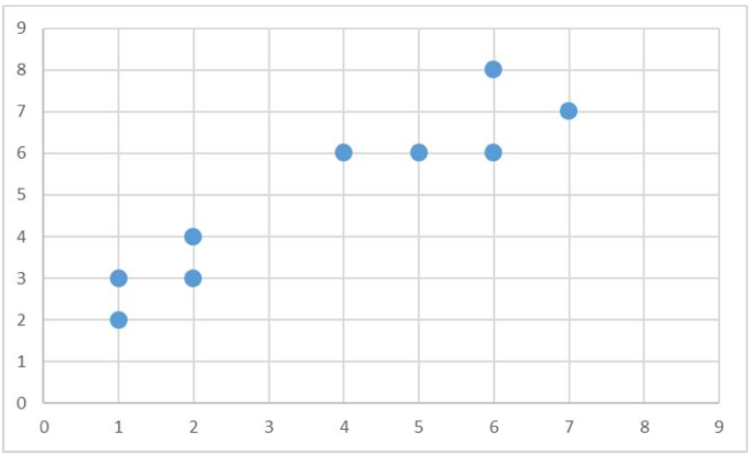 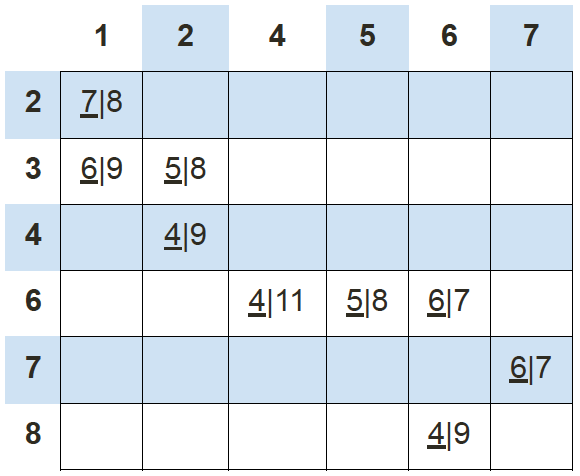 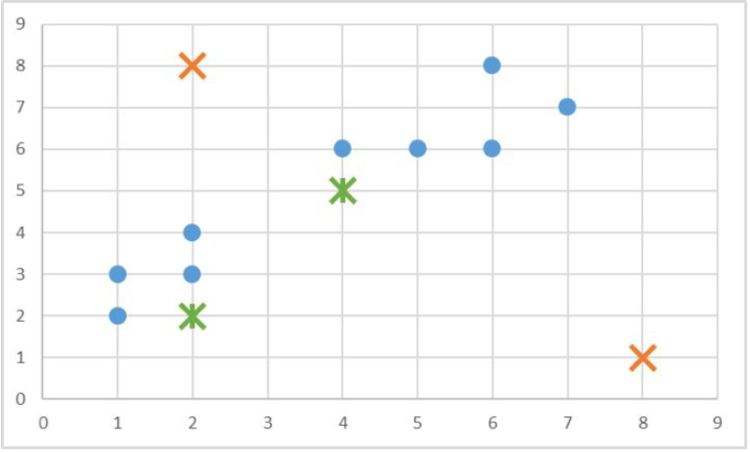 If we keep calculating the Manhattan distance of each data point with respect to these 2 new centroids, we’ll end up with another table results: 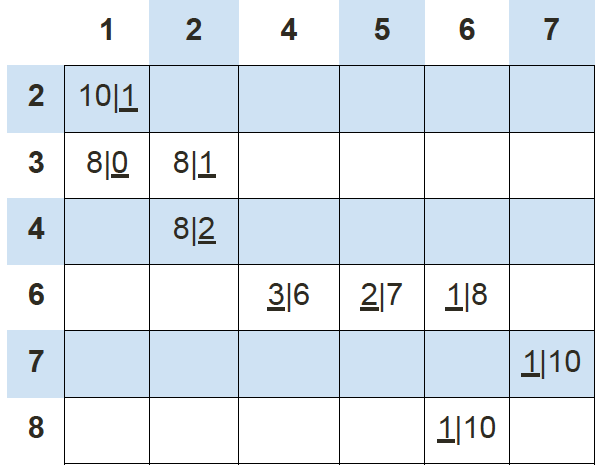 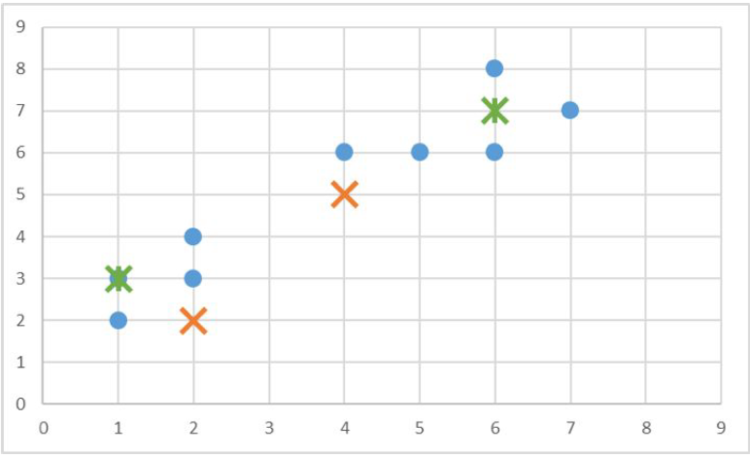 Finally, we repeat this whole process one more time to get the results table. 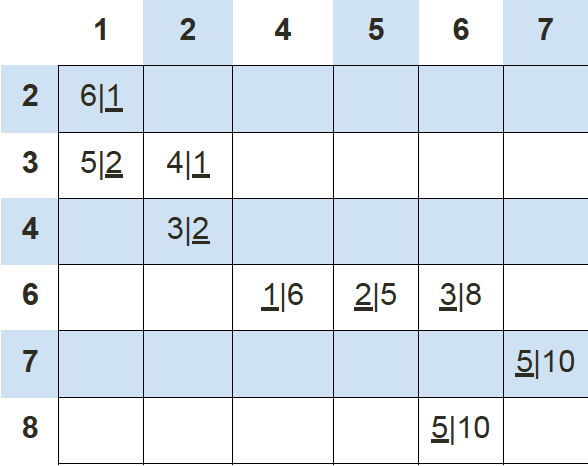 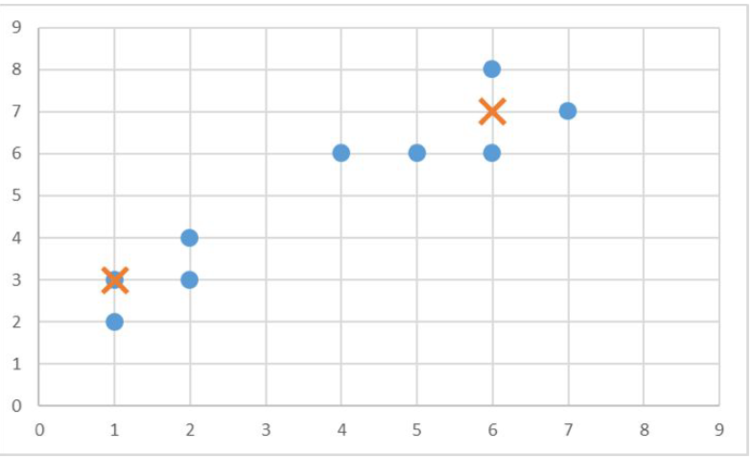 The correct choice of k is often ambiguous, with interpretations depending on the shape and scale of the distribution of points in a data set and the desired clustering resolution of the user. In addition, increasing k without penalty will always reduce the amount of error in the resulting clustering, to the extreme case of zero error if each data point is considered its own cluster (i.e., when k equals the number of data points, n). Intuitively then, the optimal choice of k will strike a balance between maximum compression of the data using a single cluster, and maximum accuracy by assigning each data point to its own cluster. If an appropriate value of k is not apparent from prior knowledge of the properties of the data set, it must be chosen somehow. There are several categories of methods for making this decision.

The sum of squared errors is a good evaluation metric to choose the number of clusters. It is calculated based on the equation below. Essentially, we want to choose k such that we can minimize SSE. 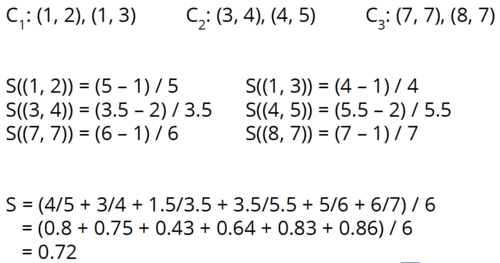 Broadly speaking there are two ways of clustering data points based on the algorithmic structure and operation, namely agglomerative and divisive.

Hierarchical clustering is an instance of the agglomerative or bottom-up approach, where we start with each data point as its own cluster and then combine clusters based on some similarity measure.

The key operation in hierarchical agglomerative clustering is to repeatedly combine the two nearest clusters into a larger cluster. There are three key questions that need to be answered first: 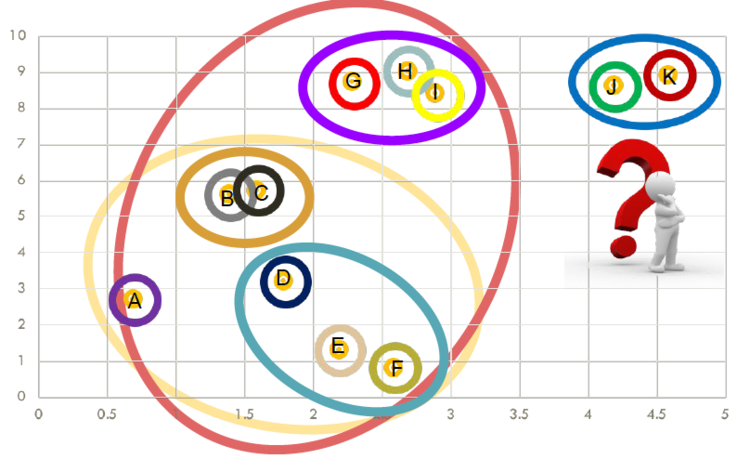 Before applying hierarchical clustering let’s have a look at its working:

In hierarchical clustering, you categorize the objects into a hierarchy similar to a tree-like diagram which is called a dendrogram. The distance of split or merge (called height) is shown on the top line of the dendrogram below. 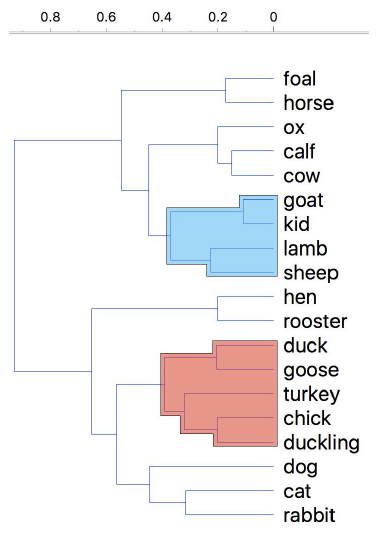 In the left figure, at first goat and kid are combined into one cluster, say cluster 1, since they were the closest in distance followed by chick and duckling, say cluster 2. After that turkey was merged in cluster 2, followed by another cluster of duck and goose. We found another cluster consisting of lamb and sheep, merging that into cluster 1. We keep repeating this until the clustering process stops.

There are several ways to measure the distance between clusters in order to decide the rules for clustering, and they are often called Linkage Methods. Some of the common linkage methods are:

The choice of linkage method entirely depends on you and there is no hard and fast method that will always give you good results. Different linkage methods lead to different clusters.

The following example traces a hierarchical clustering of distances in miles between US cities. The method of clustering is single-link. Let’s say we have the input distance matrix below:

After merging BOS with NY:

The nearest pair of objects is BOS/NY and DC, at distance 223. These are merged into a single cluster called “BOS/NY/DC”. Then we compute the distance from this new cluster to all other clusters, to get a new distance matrix.

After merging DC with BOS/NY:

Now, the nearest pair of objects is SF and LA, at distance 379. These are merged into a single cluster called “SF/LA”. Then we compute the distance from this new cluster to all other objects, to get a new distance matrix.

After merging SF with LA:

Now, the nearest pair of objects is CHI and BOS/NY/DC, at distance 671. These are merged into a single cluster called “BOS/NY/DC/CHI”. Then we compute the distance from this new cluster to all other clusters, to get a new distance matrix.

After merging CHI with BOS/NY/DC:

Now, the nearest pair of objects is SEA and SF/LA, at distance 808. These are merged into a single cluster called “SF/LA/SEA”. Then we compute the distance from this new cluster to all other clusters, to get a new distance matrix.

After merging SEA with SF/LA:

Now, the nearest pair of objects is DEN and BOS/NY/DC/CHI, at distance 996. These are merged into a single cluster called “BOS/NY/DC/CHI/DEN”. Then we compute the distance from this new cluster to all other clusters, to get a new distance matrix.

After merging DEN with BOS/NY/DC/CHI:

Now, the nearest pair of objects is BOS/NY/DC/CHI/DEN and SF/LA/SEA, at distance 1059. These are merged into a single cluster called “BOS/NY/DC/CHI/DEN/SF/LA/SEA”. Then we compute the distance from this new compound object to all other objects, to get a new distance matrix.

DBSCAN is an instance of density-based clustering models, in which we group points with similar density. It does a great job of seeking areas in the data that have a high density of observations, versus areas of the data that are not very dense with observations. DBSCAN can sort data into clusters of varying shapes as well, another strong advantage. DBSCAN works as such:

Illustrated in the graphic above, the epsilon is the radius given to test the distance between data points. If a point falls within the epsilon distance of another point, those two points will be in the same cluster. Furthermore, the minimum number of points needed is set to 4 in this scenario. When going through each data point, as long as DBSCAN finds 4 points within epsilon distance of each other, a cluster is formed.

DBSCAN does NOT necessarily categorize every data point and is therefore terrific with handling outliers in the dataset. Let's examine the graphic below:

The left image depicts a more traditional clustering method, such as K-Means, that does not account for multi-dimensionality. Whereas the right image shows how DBSCAN can contort the data into different shapes and dimensions in order to find similar clusters. We also notice in the right image, that the points along the outer edge of the dataset are not classified, suggesting they are outliers amongst the data.

And that’s the end of this post on clustering! I hope you found this helpful and get a good grasp of the basics of clustering.