Will A Pseudo-God Of Artificial Intelligence Rule Future Humankind?

Reportedly, there’s a pseudo-quasi “religion” out there called Witnesses of Climatology, and during its curious “Reverse Christmas” celebration each year adherents plant trees instead of chopping them down as Christians do during the yule season. Nice, huh? 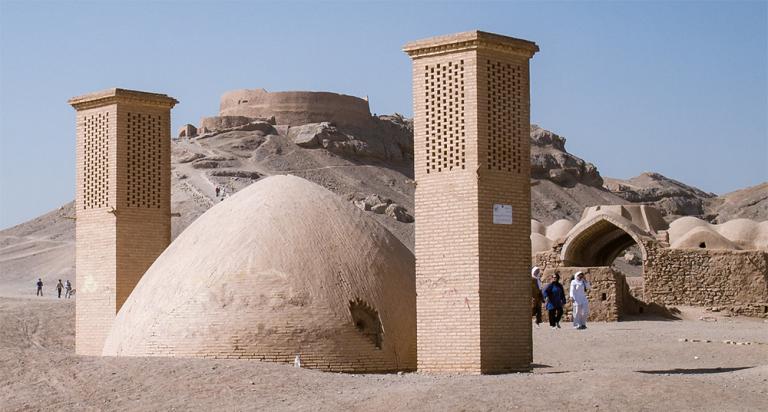 Remains of an Islamic temple in Yadz, Iran, to which Persian Zoroastrians 2,500 yars ago fled from approaching Muslim armies that ultimately conquered the empire. (Julia Maudlin, Flkr, CC BY 2.0) Image/License

Well, according to some researchers and speculators about the uncharted future of religion in the world, this kind of nouveau, faith-like, cafeteria-style synthesis may be where the world is heading in the realm of what we now call “religion.”

This is just one of the theories introduced in a very interesting BBC Future article that, although it published six months ago, I just now read: “Tomorrow’s Gods: What is the future of religion.”

One of the unanticipated side-effects of the internet in a fully globalized world is that the tsunami of continuous information overload it produces means we miss a lot as we go about our lives (See an excellent discussion of this phenomenon in this post by Connor Wood in his Science on Religion blog on the Patheos “Public Square” channel: “The Future of Religion: What Follows the Decline of ‘Big Gods.’”) We simply do not have enough time, energy or multi-tasking ability to constantly focus and prioritize to usefully take it all in, much less usefully analyze and process it all.

But better late than never. This long article, one in BBC Future’s “Best of 2019” collection, is a profoundly instructive and fascinating read.

As their name suggests, California-based (where else?) Witnesses of Climatology has a distinctly modern focus on the environment, holding regular gatherings to present sermons not on God but “eulogizing the awesomeness of nature” and education on environmentalism. One of the group’s rituals, like Reverse Christmas, is its annual “Glacier Memorial Day,” when congregants “watch blocks of ice melt in the California sun,” the BBC Future article reported.

Although there is a fair amount of eye-rolling at such New Age-y tree-hugger sects, the article notes that, like nascent Christianity in the first century and the Persian faith Zoroastrianism more than a millennia before that, beliefs and practices initially reviled as dangerous or insane fringe phenomena have sometimes coalesced into mainstream faiths throughout history.

An important difference now is that cults can explode into uber-popular quasi-religions in a historical instant with the internet. They’re usually somewhat momentary as viral trends usually are, but very real.

“Online movements gain followers at rates unimaginable in the past,” writes former New Scientist magazine editor-in-chief Sumit Paul-Choudhury in his BBC Future piece. “The Silicon Valley mantra of ‘move fast and break things’ has become a self-evident truth for many technologists and plutocrats. #MeToo started out as a hashtag expressing anger and solidarity but now stands for real changes to long-standing social norms.”

For example, the 2001 United Kingdom census revealed that Jediism, which derives from the fictional faith observed by the good guys in the movie trilogy Star Wars, was the fourth largest religion in the realm with nearly 400,000 adherents. It began as a “tongue-in-cheek online campaign.” A decade later it had slipped to No. 7 among British faiths but still enjoys “an awful lot of people” in its ranks, according to Beth Singler, who studies the social, philosophical and religious implications of AI (artificial intelligence) at the University of Cambridge.

Indeed, AI is a big focus of new-age “faiths,” with aficionados envisioning a world where a globally universal machine would oversee life on earth and enforce morality in a completely objective, fair-“minded” fashion. But it’s not necessarily revolutionary.

“Even the technological trappings aren’t new,” wrote former New Scientist magazine editor-in-chief Sumit Paul-Choudhury in his BBC Future piece. “In 1954, Fredric Brown wrote a (very) short story called ‘Answer,’ in which a galaxy-spanning supercomputer is turned on and asked: is there a God? — ‘Now there is,’ comes the reply.”

Another spiritual trend is what’s very old is new again.

For example, an Icelandic pagan faith called Ásatrú has re-emerged — and it’s building the country’s first pagan temple for nearly 1,000 years, Paul-Choudhury reported. Of course, there are underlying practicalities: the revived church is entitled to a share of the country’s distributed “faith tax.”

This kind of back-to-the-future phenomenon has also been happening in the U.K. for some time, as pagans, Druids and other lovers of ancient faiths and rites converge during the summer solstice each year to revel at Stonehenge’s iconic pagan ruins.

“Communist Vietnam, for example, is officially atheist and often cited as one of the world’s most irreligious countries – but sceptics say this is really because official surveys don’t capture the huge proportion of the population who practice folk religion.”

But the futurist money is on new spiritual inventions as we move forward, because the modern, technologically sophisticated world offers so many new and fertile fields for even seemingly outlandish beliefs.

“We’ve always had new forms of religiosity, but we haven’t always had enabling spaces for them,” Singler suggests. “Going out into a medieval town square and shouting out your unorthodox beliefs was going to get you labelled a heretic, not win converts to your cause.”

With the anonymity-enhancing aspects of the internet and new tech, people can have their strange beliefs and avoid up-close and personal opprobrium and shaming, too.

Anything is now possible in the realm of faith.

Note that Christianity, currently the world’s dominant faith, is relative lightweight compared to Zoroastrianism, which emerged 3,500 years ago in Stone Age Iran — 1,500 years before Jesus supposedly walked the earth — and introduced history’s first monotheistic divinity. It became the official faith of the Persian Empire and enjoyed millions of followers, a huge fraction of the global population at the time. When that empire was conquered a thousand years later by Muslim armies, Zoroastrians became persecuted and were forced to convert to Islam.

Where is Zoroastrianism today, or Greek and Roman paganism for that matter?

Where will Christianity be tomorrow?

What, if anything, will replace it?