After the Bust: Building Out Blockchain Technology

We believe in Blockchain. Yet we also believe that the crazy boom will have a bust. When it does, we think something much more important will be built out underneath it all. If you’re interested to learn what hundreds of years of history teaches us is a phenomenal long term investment opportunity, after the bubble bursts, then read on.

The evolution of the cryptocurrency and underlying blockchain infrastructure is in its earliest phases, but the cycle of value creation itself is old. We’ve been watching these patterns for decades if not centuries — South Sea Bubbles and Dutch tulips, anyone? Time and time again, emergent technology markets follow a clear evolution, described by researcher Carlota Perez as a progression through several phases. This pattern will hold true for blockchain technology. In its simplest form, it’s a boom, bust, and then buildout. 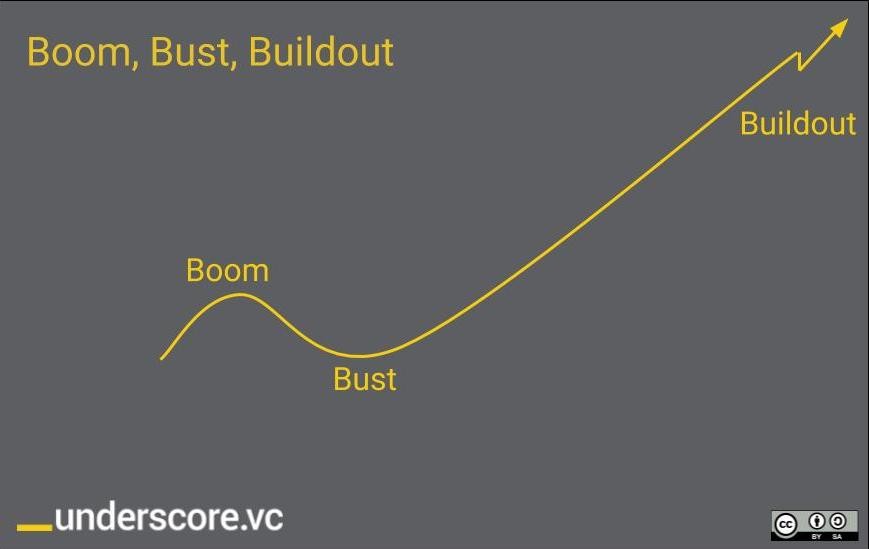 Perhaps the most famous demonstration of this is the Dot Com Bubble of the early 2000’s, where fortunes were made and lost overnight. It took 15 years to recover. 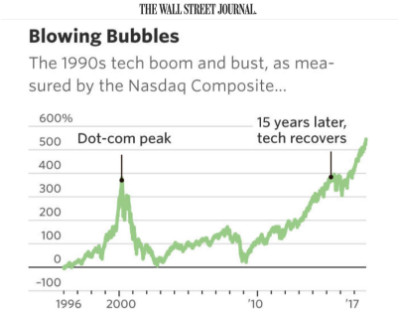 Initially, the web brought immense disruption to many industries such as the publishing and advertising businesses that sold print and physical circulation and the music industry as it went digital.

Using the example of how music was disrupted, next came a disintermediation where record labels that once relied on their stranglehold of artists found themselves first by-passed by illegal sharing services like Napster, and ultimately disrupted yet again by legal services like Apple’s iTunes.

Today, billions of dollars in value have been captured by services like Spotify, which have reimagined and redeveloped the best of those worlds for consumers who want the best of both worlds — access, sharing, and discovery of any music they want, all without the hassle of owning it. 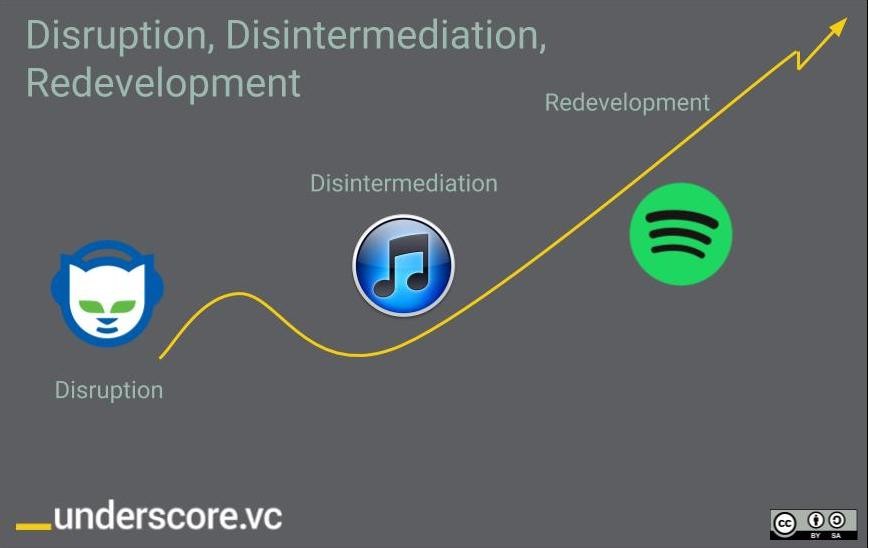 In the future, Blockchain may enable the next disruption in the value chain, where artists will get paid directly by their listeners without any intermediary, but that’s a story for another article.

In the early days of the Web, the cycle of boom/disruption, bust/disintermediation cost individuals, investors, and companies billions of dollars. Yet, from its ashes arose a hugely valuable foundational infrastructure for the web as we know it today. 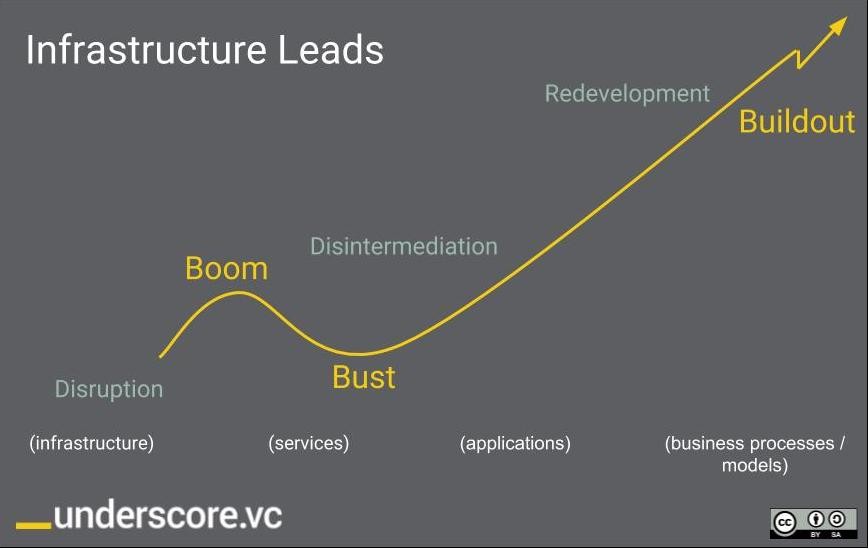 From web standards and browsers such as Firefox to programming languages like JavaScript and RESTful architectures, massive value creation ensued in the buildout/redevelopmentphase, eventually far exceeding what was lost in the bust, making a pathway for giants such as Google, Amazon, Facebook, Salesforce and many other social, mobile, commerce and other platforms we take for granted today.

But there are some important differences we’re seeing in this particular cycle.

Normally, venture capital would be financing the initial development of all this. In actuality, equity financing of Blockchain pales in comparison to ICOs. 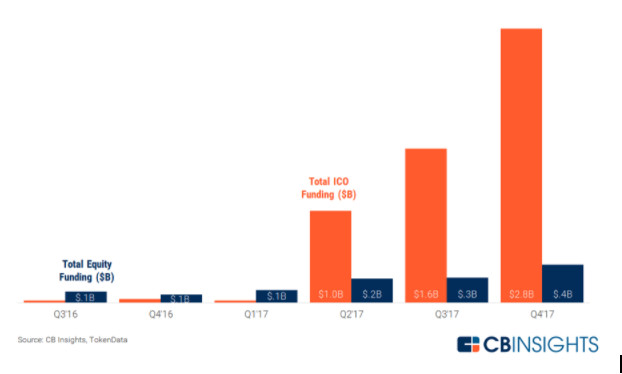 What this means and where it will end for the ICO investors remains to be seen. On the positive side, it’s providing immediate access to capital. On the other hand, many of these buyers don’t understand the essential difference between equity and utility in the coins or tokens they are buying and the inevitable regulation ahead. Just a small fraction can explain the underlying value. “Buyer beware” should be “buyer begone” unless you understand these points. Or else it will end up as “buyer be bust”.

Unaware buyers piling in unwittingly is a sure sign of a buildup to a bust in ICOs.

The picture is more understandable when looking at Bitcoin, especially if you’re a citizen of an economy like Venezuela, where your printed currency value has dropped precipitously. Citizens of these economies have flocked to cryptocurrencies despite their volatility because it’s all relative and to them it looks like a miraculous hedge to have a programmatically smart decentralized currency versus an out of control central government with a license to print money at will. 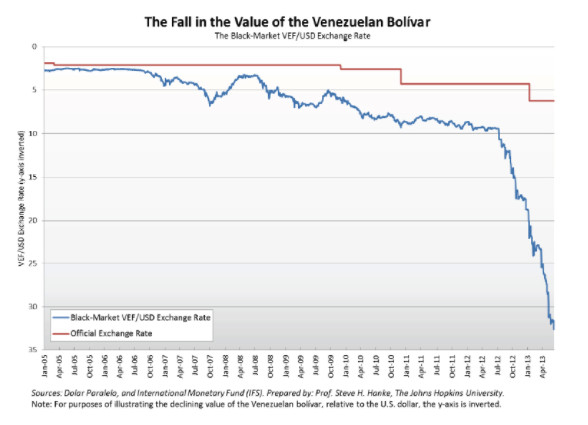 One potential justification is that there is a finite amount of Bitcoin and ~80% has already been issued. Assuming that Bitcoin solves the issues of scalability, speed and security, it has the potential to avoid the inflationary issues of currencies like the Venezuelan bolívar.

In the meantime, we must separate Bitcoin and ICOs from Blockchain.

There’s an irony here. When there’s a bust, we expect a backlash that leaves people uncertain of the future potential for Bitcoin, cryptocurrencies, and ICOs. Meanwhile, the underlying buildout of the blockchain infrastructure that’s being created to support all this will ultimately enable a more trusted world. How long it takes to create that trust depends on more than technology. It depends on us understanding these cycles and how to handle the inevitable human emotions of fear and greed that inflate and burst the bubble. Hopefully this article has prepared you to think for yourself beyond those emotions.

This post was originally published on the Underscore VC blog.

Co-authors of this article Richard Dulude, Ben Jones, Bryan House and others at Underscore VC.