From the IoT Evolution to the Revolution of the Cognitive Age 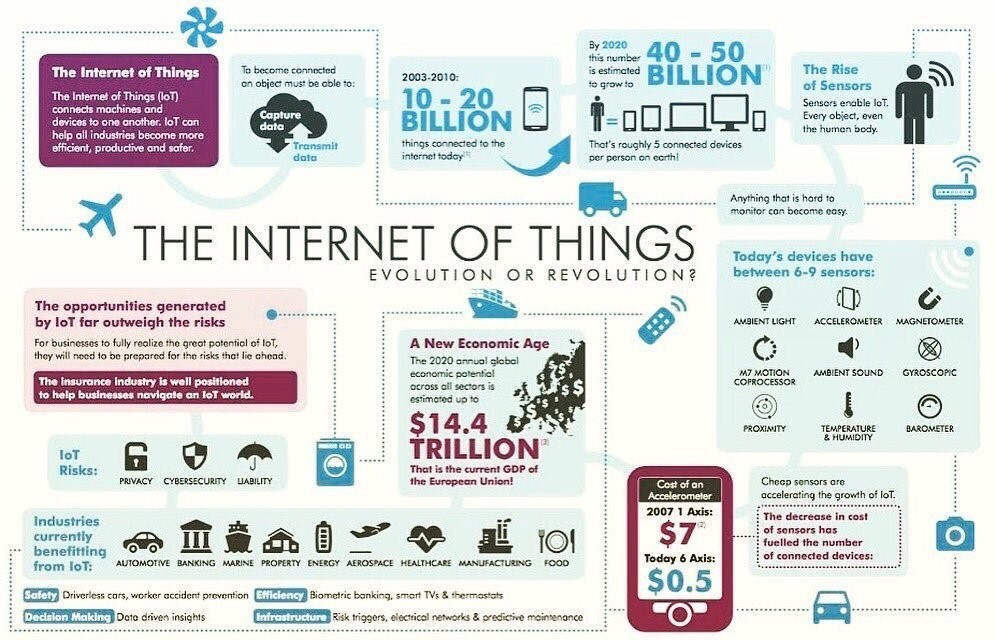 During all these years evangelizing on the Internet of Things (IoT), I have been explaining to customers, partners and friends that IoT can positively change the way we do business and the way we live our lives.  I have been asked if IoT is a new revolution in our society, or it is just one more step in the technological evolution of the digital revolution. Today, the debate continues but whether evolution or revolution, The Internet of Things is here to stay.

If you have read AIG´s whitepaper entitled “Internet of Things: Evolution or Revolution?” you learned IoT, from its origins, to its applications in business, the risks associated with its inevitable arrival and how with the IoT is coming bringing dramatic changes. In the whitepaper we discover that in spite IoT is often presented as a revolution that is changing the face of society or the industry in a profound manner. It is an evolution that has its origins in technologies and functionalities developed by visionary automation suppliers more than 15 years ago.

I definitely think it’s an evolution

It is important not scare the most conservative enterprises. It is not about ripping out current automation systems to replace them with new technologies. End users will resist rapid and radical change because of the increased risk of downtime and associated costs.

I think that this debate should be framed in a more general question. What Age period are we living?

The Connected Age or the Age of Sensorization

I consider the start of the Connected Age when the Internet of Things term was coined by Kevin Ashton executive director of the Auto-ID Center as the title of a presentation he made at Procter & Gamble (P&G) in 1999. Probably Kevin envisioned that the move to sensorization will transform every industry in the world. In the Age of Sensorization, it’s possible to make more accurate and quantifiable assessments using real time sensor based information.

The global sensorization is driving new ideas and thoughts that will ultimately drive innovation in our personal, business and working lives. Sensor´s data is opening up new opportunities, driving new business models and taking innovation to new levels.

No doubt that sensors’ data is a valuable commodity. The European Commission has proposed to impose a tax on the revenue of digital companies based on their users’ location, on the grounds that “a significant part of the value of a business is created where the users are based and data is collected and processed.”

We are still living in the Connected Age. I expect this Age ends in 2025, no because there will not be more things to connect but because is when most of things will become intelligent and start controlled by robots.

The Robotic Age or the Age of Artificial Intelligence

Reading Genesis of AI: The First Hype Cycle, I rediscovered how Artificial Intelligence (AI) was born and evotution till now. But it was after I read Your Data Is Crucial to a Robotic Age. Shouldn’t You Be Paid for It? I realised maybe I was wrong and we already living the final years of the Connected Age and we are entering before 2025 , not without a certain fear, the Robotic Age.

According to IDC: ”By 2019, 40% of digital transformation initiatives – and 100% of IoT initiatives – will be supported by AI capabilities.

AI has emerged as the most exciting capability in today’s technology landscape. It’s potential is rich in large, complex organizations that generate massive amounts of data that can be fed into AI systems.

Data is the crucial ingredient of the AI revolution. We can envision that  AI -driven companies will represent the future of broader parts of the economy and  we may be headed for a world where labor’s share falls dramatically from its current roughly 70 percent to something closer to 20 to 30. At the same time the number of robots will increase and be part of the society.

Robotics and Artificial Intelligence have reached a crucial point in their evolution. A robot is no longer just a mechanical device capable of interacting with its environment and carrying out an assigned task. At present, the main research laboratories all over the world are developing and implementing in sophisticated robots technical, practical and even philosophical tools. Nevertheless, we can not forget that there are still problems in the land of AI.

Could we avoid psychopath and sociopath robots?

Companies need to move quickly to embrace AI so that they can support the burgeoning Internet of Things (IoT) and deliver the kinds of services customers are demanding.

Finally, if your company is thinking about Build or Buy Artificial Intelligence, take a look at this article.

The cognitive revolution was a period during the 1950s-1960s when cognitive psychology replaced Behaviourism and Psychoanalysis as the main approach in psychological fields. Increasing focus was placed on observable behaviours in conjunction with brain activity and structure.

For those of you who believe the mind the centre of all things, David Brooks, the New York Times columnist, wrote two editorials  that point to wider transformations that are shaping the world in which we live.

We could consider the start of Cognitive Age when Facebook abandoned an experiment after two artificially intelligent programs appeared to be chatting to each other in a strange language only they understood. The two chatbots came to create their own changes to English that made it easier for them to work – but which remained mysterious to the human.

Are we sure Facebook shut down Its Artificial Intelligence Program?  Facebook not the only company or government running secrete AI programs. Are you scared?

There are many myths about Cognitive. This article pusblished by Deloitte the Consulting company help dispel five of the most persistent myths.

We need to start thinking how to prepare ourselves and our business for the Cognitive Age.”. As I explain in “Bring Your Own Cyber Human (BYOCH) – Part 1: Augmented humans” we are in the path to being cyber humans. To live in the Cognitive Age, I encourage companies to invest in how to enhance our senses and to increase our intelligence to compete and win over robots.

The Connected Age is a fact. ARM is predicting 1 trillion IoT devices will be built until 2035.  For those who think that the IoT is a revolution, not be worried because we are just simply in an evolutionary process.

With the introduction of AI and machine learning, enterprises will be able to embark on projects never thought possible before. The Robotics Age is going to be a great challenge for humanity. The fear of being inferior to our creation, not being able to control them, to compete with machines for a job, to have to obey them will really mean the beginning of a revolution.

What does AI mean for the future?. What will be the implications and the risks? Will AI really understand humans?. With the current skills humanity will be in inferiority to face the cognitive systems that will populate Cognitive Age.  That is why I encourage governments, private laboratories and researchers to work on  Augmented Humans projects if we do not want to be slaves to our uncontrolled inventions.

Metadata Management as a Strategic Imperative